My personal comments are at the end of this overview sourced from McGill-Queen's University Press website
https://www.mqup.ca/educating-the-imagination-products-9780773545731.php#!prettyPhoto

Northrop Frye recognized the imagination as a window opening onto literature, society, and the human spirit. 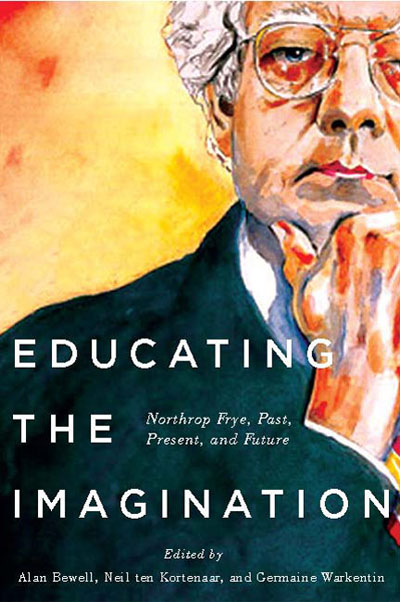 Frye's long career made him Canada's most creative public intellectual. A century after his birth, his many books demonstrate a powerful vision of the resources of the human imagination. Frye's critical theory sought the continuities linking human creation in all spheres of life, trusting in the idea of a single human community sharing myths, stories, and images that express shared visions and desires.

The essays in Educating the Imagination illustrate the extraordinary range of Frye's ideas. Robert Bringhurst examines how Frye mapped the mind, Ian Balfour considers what "belief" meant for Frye, and Gordon Teskey re-examines two of the critic's great subjects - Blake and Milton. Michael Dolzani and Thomas Willard discuss Frye's symbolism, and Robert Tally looks at his utopianism. A strong thread running through all the essays is Frye's interest in the Romantic era, as Mark Ittenson shows.

Three essays pair Frye with other titans of the time: Fredric Jameson, Paul de Man, and Jacques Derrida. Troni Y. Grande examines a gender issue in Frye's theory of tragedy, and J. Edward Chamberlin concludes by relating Frye's writings to songs, ceremonies of belief, and the common ground that they represent across cultures.

Engaging with significant matters of contemporary concern, Educating the Imagination provides a renewed understanding of Northrop Frye and the fertility of his ideas about the imagination and society.

My Personal Comments: Upon reading through the essays I was enlightened and curious about Frye's views on the necessity to educate the imagination. These essays presented effective arguments on critiquing Frye's writings that determined his intellectual capacity with no bounds in the literary art form. I was intrigued by Frye's concentration on the Bible as a literary guidepost as well as his notions on symbolism and mythology.

Educating the Imagination is an excellent read as it imparts the strong points as well as the flaws of Frye's writings. And in many ways, Frye left an enduring mark on defining and engaging in the works of literature.
Posted by Maria Lynch at 11:14 AM No comments:

Email ThisBlogThis!Share to TwitterShare to FacebookShare to Pinterest
Labels: Essays

The Angel on the Roof by Russell Banks - Short Story Collection 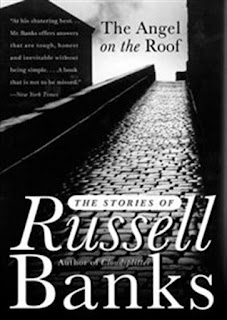 The Angel on the Roof is a collection of stories by Russell Banks.  These stories depict the lifestyles of those struggling to survive. And yet some stories illustrate the abilities of these characters to accept and continue to live through mayhem despite their dreams of a better life.

There is a sense of realism in some of the stories, while others appear to have that obvious fictional component to them. These two factors make for an engrossed reading through each story.

Banks, the author, deftly and appropriately describes with significant details of the scene and situation as the story unfolds.  The physical descriptions of each character supports the entity of their being.

The ending of each story is a cliff hanger that leaves the reader to speculate on the possible end result.

The Angel on the Roof is a long, long read and because of the suspense created in each story, the reader can be motivated to read the next and the next.
Posted by Maria Lynch at 10:55 AM No comments: 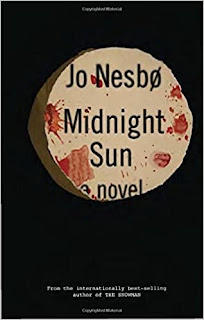 The following review of Midnight Sun by Jo Nesbo is from LitLovers.com
https://www.litlovers.com/reading-guides/fiction/10526-midnight-sun-nesbo

The internationally acclaimed author of Blood on Snow and the Harry Hole novels now gives us the tightly wound tale of a man running from retribution, a renegade hitman who goes to ground far above the Arctic circle, where the never-setting sun might slowly drive a man insane.

He calls himself Ulf—as good a name as any, he thinks—and the only thing he’s looking for is a place where he won’t be found by Oslo’s most notorious drug lord: the Fisherman.

He was once the Fisherman’s fixer, but after betraying him, Ulf is now the one his former boss needs fixed—which may not be a problem for a man whose criminal reach is boundless. When Ulf gets off the bus in Kasund, on Norway’s far northeastern border, he sees a "flat, monotonous, bleak landscape...the perfect hiding place. Hopefully."

The locals—native Sami and followers of a particularly harsh Swedish version of Christianity—seem to accept Ulf’s explanation that he’s come to hunt, even if he has no gun and the season has yet to start.

And a bereaved, taciturn woman and her curious, talkative young son supply him with food, the use of a cabin deep in the woods, a weapon—and companionship that stirs something in him he thought was long dead.

But the agonizing wait for the inevitable moment when the Fisherman’s henchmen will show—the midnight sun hanging in the sky like an unblinking, all-revealing eye—forces him to question if redemption is at all possible or if, as he’s always believed, "hope is a real bastard." (From the publisher.)

My Comments: Nesbo, the author of this novel, takes the reader to a remote part of Norway near the Arctic Circle.  Through his vivid descriptions of the landscape along with his poignant interactions with the people of this part of Norway, the author deftly illustrates the unusual nuances of living in this part of Norway.
Posted by Maria Lynch at 5:31 PM No comments:

Translated From The Gibberish Seven Stories and One Half Truth is a collection of short stories set in India and Canada.  Author Anosh Irani takes the reader on an eclectic journey through the characters of these stories. There is tension, humour, and family squabbling that illustrates a certain kind of reality in these stories.

Irani deftly maneuvers the stories to present surprising scenarios that highlight the way of life in India and Canada. He takes the reader into family dynamics that include interactions with people outside the family circle. He exposes the stark differences of life by illustrating the plight of setting up a new life in Canada while maintaining the connection with India.

Some stories are heartbreaking while others are uplifting with a sense of humour depicting the idiosyncrasies evident in the lifestyles of the people in India.  He deftly depicts the adjustments of living in Canada; the pros and cons of choosing to live in Canada and how it does not always work out as planned. The endings are cliff hangers in each of the stories. Irani expects the reader to draw conclusions.

Translated From The Gibberish Seven Stories and One Half Truth is an unusually fascinating read.
Posted by Maria Lynch at 10:26 AM No comments:

Democracy and Its Crisis by A. C. Grayling - Non-fiction 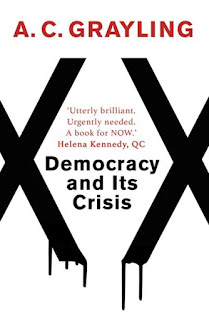 Democracy and Its Crisis written by A. C. Grayling is a timely exposure of the state of Western democracy today. Grayling takes the reader through historic political events in England, America and France. The author outlines the rise of power in a democratic state of play with its various nuances as they occurred in the past era.

Grayling proceeds to decipher how democracy has evolved into its different transformations; sometimes for the good of the people and other times in a questionable manner that results in "tyrannical takeover" by certain elected leaders. It explains the rationale for our current situation with the rise of populism in the Western democratic countries. There are suggestions on how democracy can be maintained through appropriate governance models.

Democracy and Its Crisis is a very good read as it resonates loud and clear to today's political situations in Western democratic countries.
Posted by Maria Lynch at 10:26 AM No comments:

Desert Solitaire: A Season in the Wilderness by Edward Abbey - An Autobiography 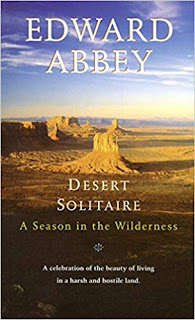 As a seasonal National Parks ranger in the late 1950s, Edward Abbey, in Desert Solitaire, describes his experiences and narrates a series of stories of his interactions with the people and wildlife in the National Arches Monument  now known as National Arches Park in the Colorado Plateau region of the desert South Western United States.

Abbey praises the natural environment of this area and preaches against any development in the form of modern revitalization for the purpose of enabling tourists to enjoy the Park with comfort. This, he believes would take away from absorbing the rustic natural wonder of this area.

He captivates the reader with his vivid descriptions of the flora, fauna and gigantic formations of stone sculptures. These wonders are formed, not by man, but by the natural erosion of this region. There is the balance rock, the three gossiping sisters, the courthouse and so forth are the named rock wonders situated in this Park.

He explains how he occupies his time alone on this tour of duty; he is anything but bored; instead he engages with the environment in ways that would make the reader envious of what it means to befriend nature, its surroundings and its inhabitants.

Desert Solitaire is a fascinating autobiography that leaves an indelible mark on the reader’s mind.
Posted by Maria Lynch at 1:32 PM No comments:

The Pearl by John Steinbeck - Fiction 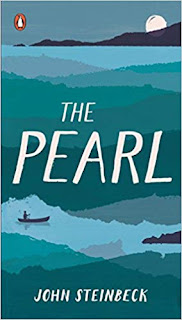 John Steinbeck, author of The Pearl, takes the reader to a small town near the Gulf of Mexico. The people are poor divers who live off their hope of finding pearls and eventually selling these pearls. It is an inadequate lifestyle that provides the bare minimum.

Kino and Juana and their son Coyotito are the main characters in this story. Kino is a third generation diver. On this one particular dive he brings up a very large pearl. It becomes the talk of the town and everyone gathers around the Kino brush house.

The story unfolds as the dreams of what could be as a result of cashing in on this pearl. But it is a difficult road ahead as Kino tries to sell the pearl.

Steinbeck brings out the nature of the human spirit in this folktale as he exposes the nuances of the plight of Kino Is not literate enough to decipher if he is being told the truth or not. And there is no one in their neighbour hood who can inform him as they too are not literate. It is a fascinating story that highlights how the disadvantaged survive in this kind of environment.

The Pearl has a dramatic ending as the reader goes through the ups and downs that Kino and his family face while try to sell the pearl.
Posted by Maria Lynch at 6:41 PM No comments: