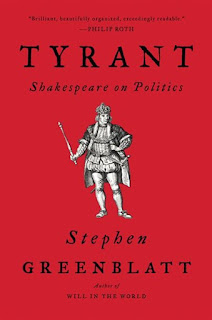 In Tyrant Shakespeare on Politics, Stephen Greenblatt has written a timely analysis on politicalLeaders as depicted in Shakespeare’s works. Greenblatt picked King Lear, Richard III, Macbeth to illustrate how leaders can influence and become tyrants while ruling its people.

Greenblatt portrays each leader during his time of rule showing how the people were maneuvered, distracted, punished severely by death if the ruler’s wishes were not followed or posed a threat to the ruler.  The descriptions with analyses accurately depict the cruelty and barbarous manner of leadership of these political leaders of the time.

There are similarities of what the world is experiencing today from the current political leaders. Greenblatt’s analyses has many parallels that highlight the possible demise of our representative democracy of today.

The author points out that Shakespeare, whilst writing these works, was very careful and astute in depicting these characters of a different era from the one he was living in. Shakespeare was well aware of what could happen to him had he written about his contemporary political leaders.

Tyrant Shakespeare on Politics is a timely read that enables the reader to become aware and possibly  become active in ensuring our return to genuine representative democracy from our political leaders.