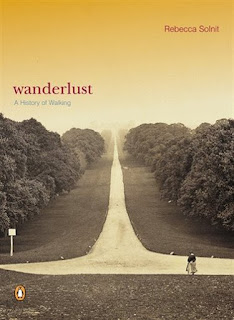 Rebecca Solnit, author of Wanderlust: A History of Walking, traces the activity of walking from the past to the contemporary era. It delves into how philosophers regarded the act of walking as part of their thinking process. From their walking experiences, writers and poets were inspired to create their literary works. For instance, the author cites William Wordsworth walking through the English countryside that formulated many of his poetic works. Historically, women were not allowed to walk; and over time and with the evolving change of dress, women began going on walks as a leisurely activity.


As more and more people engaged in this walking activity, they were trespassing private property in England, but this activity eventually resulted in creating walking pathways. Walking in demonstrations and protest movements empowered political change. Over time, with the increase of suburbanization and the rise of the use of the car, walking was frowned upon and became an activity done by the poor as described by Solnit.

Solnit addresses the cultural nuances of walking and aptly describes the social impact of walking, but peripherally refers the era of walking on a treadmill and driving to shops to purchase gear for walking and mountaineering without much depth to its importance on health and well-being.

Wanderlust: A History of Walking gives the reader a glimpse into the activity of walking that dates  back to a different era and how this activity evolved over time. It is an interesting read.