Book Review: The Color of Water by James McBride - Memoir 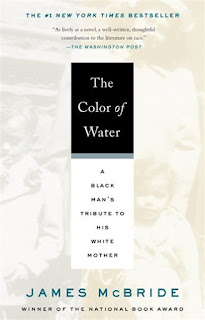 James McBride, an accomplished musician, journalist and author gives the readers an excellent rendition of his tribute to his mother in his memoir entitled  The Color of Water. His mother, Ruth is a white Jewish woman married twice to African-Americans during an era of segregation. With her first husband, Andrew McBride, they had eight children.  After his death the re-marries, Hunter Jordan another African-American and adds four more children to their family.

The author takes the reader through the various nuances, trials, tribulations and glaring realities of belonging to a large family of twelve children with bi-racial parents. Even though, it is a chaotic and poor family their mother ensures that the children go to the best Jewish schools; she stresses the importance of education. In spite of the discrimination and being shunned in the schools, the children survive and achieve what their mother expects of them.

There are sections where others in the family relate their stories. These tend to add a bit of confusion as the reader is not quite sure whose story is being told--sometimes it could be the mother or a sister.  It keeps the reader in suspense.

The Color of Water is a wonderful tribute to the mother, Ruth McBride Jordan. Fundamentally, it is a portrayal of family love in a dysfunctional kind of way and yet each child surfaces with an achievement that makes their mother proud.
Posted by Maria Lynch at 5:34 PM