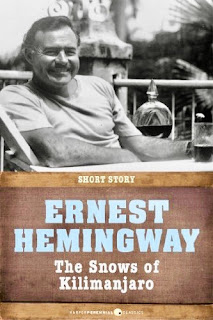 The Snows of Kilimanjaro by Ernest Hemingway is a story about a couple, Harry and Helen, who escape from the lifestyle of the rich and famous in Paris to a hunting adventure near Mount Kilimanjaro. At around twenty thousand feet, and snow-capped this is the highest mountain in Africa. The Masai, the local tribe, call it the House of God.

Harry is seriously ill, coping with gangrene festering in his leg. He was pricked by a thorn and did not treat it promptly. Now he lies in a cot awaiting death. Helen loves him dearly and comforts him as much as she can. They cannot go anywhere as their truck has broken down and thus their next option to await a plane to take them to a hospital.

In moments of unconsciousness, evident throughout the story, Harry muses about his lifestyle as a writer. He has not done enough and appears distracted by his involvement with rich women and they are boring to him. The conversations between Harry and Helen reveal her love for him and his dislike for her. He lies in the cot claiming that he will die from the gangrene. Towards the end of the story, Harry is dreaming of a plane taking him away to a hospital. But the ending is different.

The Snows of Kilimanjaro depicts reflections by a writer on his lifestyle and his incomplete life as a writer. It is a sad story.