Book Review: Where You Belong by Barbara Taylor Bradford - Fiction 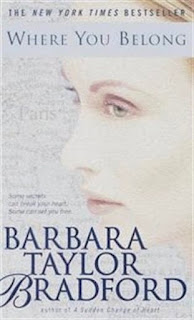 Barbara Taylor Bradford in her novel, Where You Belong captures the war time horrors through the lens of three photojournalists—American, Valentine (Val)Denning, British, Tony Hampton and American Jake Newburg. They are on the frontlines in Kosovo where they are in the midst of a shooting mayhem. The three of them are taken down; they wake up in a hospital in Belgrade only to find out that Tony died. Val was devastated as he was her lover. Gradually Tony’s character is unraveled, beginning at his funeral.

Severely injured, Val and Jake recuperate in Paris, their home office. They cope with uncovering the true nature of Tony and its impact on Val particularly. She struggles to find her place in the world. With support from her colleagues and Jake she engages in reflective awareness. In between, her brother contacts her with a request to come back to New York City to visit with her ailing mother. This brings intrigue and a new kind of dynamic to the story as the author delves into Val’s relationship with her mother and her family.

Ultimately, the author deftly illustrates the strength and determination of Val Denning to find her special place in the world. Where You Belong is an interesting read with many twists and turns in the story.
Posted by Maria Lynch at 4:02 PM