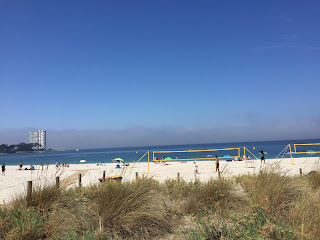 On this first day, our group walked along the Camino Way for 26km heading towards Vigo. It was a misty day. We followed the promenade right until we came to Playa Santa Maria. We walked along the waterfront boardwalk and crossed over some bridges.

During the remainder of the day, we interacted with each other on many topics such as how did Iberia split to become Portugal and Spain. 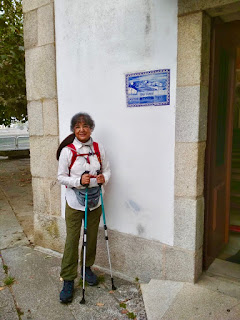 We stopped and took pictures, had our Camino Passports stamped, dated. and signed at other sites. Some of the time I drifted away and reflected on my own.

After lunch, we continued walking towards our next stop, Vigo. We stayed close to the waterfront until we came into the centre of Vigo as we noticed the Cathedral nearby.

We arrived at Hotel Compostela Vigo. At dinner we were given a bit of a history of the Camino by our knowledgeable Tour Leader as we raised a glass or two on our first day of accomplishment. 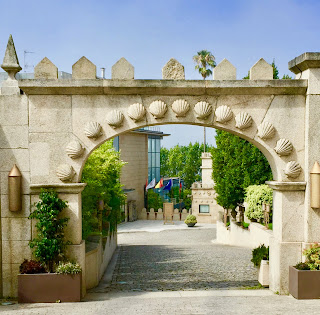 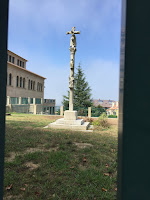 Notes: Baiona is the most touristic sea side town in the south of Galicia with a well preserved Old Town, golden sandy beaches and a wide variety of important monuments.

We walked through the town of Vigo admiring the beautiful architectural buildings. 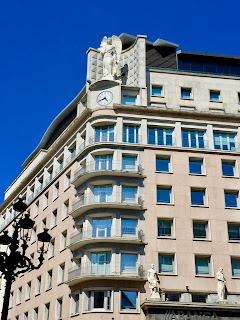 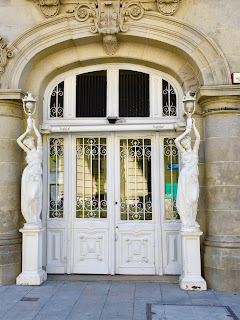 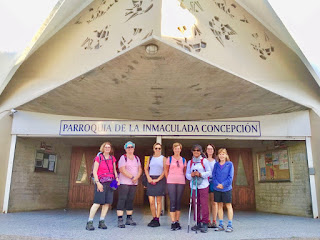 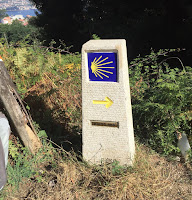 Then we came to the dirt trails signposting the Camino Way.  The first part was an enjoyable walk through the nature trails where there was much peace and more reflective time alone.

By the afternoon and before lunch we meandered our way down a very steep decline. This was very challenging.  But with a deep chagrin we did it despite the hot, hot sun bearing down on us. 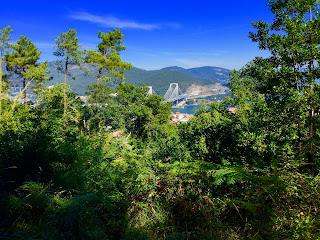 We found a restaurant for a much needed late lunch break as we “inhaled” the Spanish beer with a sandwich. Our hotel was located about 5.6km after Redondela on the Camino.

We arrived at our accommodation, Hotel Santo Apostolo for cleansing, dinner and a good night's sleep.  The next day we walked to Pontevedra, a 20km walk.
Notes: Vigo is the largest city in Galicia--population 200,000 more than double that of Santiago de Compostela. The city faces a large estuary and still is an active port.

On September 11, 2018, we left Redondela for Pontevedra. After walking along the highway for about 500 metres we arrived at the nature trail. We walked on the Roman road that were mainly remnants of rock boulders with not so challenging up and down terrain.

We passed quite a few vineyards. It was a peaceful yet memorable walk on the trails.

21km later we arrived in Pontevedra in the early afternoon. 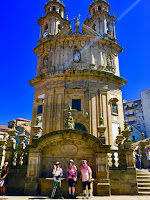 We visited the Church of Our Lady of the Pilgrims where our Camino Passports were stamped. We arrived at our Hotel Rias Bajas for a night’s stopover. We had time to explore the city of Pontevedra.
Notes: Redondela - a town of 30,000 inhabitants is most famous for its viaducts built in the 19th century and is known as the "Village of the viaducts."

We left Pontevedra early on Wednesday, September 12, 2018. We noticed many more pilgrims on this day. From now onwards the pilgrims converge on the same path to Santiago de Compostela. The crowds dwindled down by the afternoon. 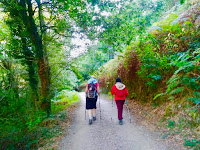 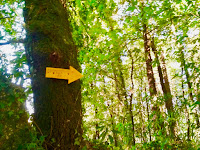 The sun was blazing down on us creating temperatures of 30 degrees C. It was unbearably hot. But with water/ice cream breaks we gradually reached our hotel, O Cruceiro Centre, in Caldas de Reis.
Notes: Pontevedra is a town of 80,000 inhabitants, with major transport links, shops, restaurants, and banks. The churches, architecture and Museum contain many depictions of St. James.

Today, September 13, 2018 we left Caldas de Reis for Padron—our last stop before walking into Santiago de Compostela. The walk to Padron was enjoyable with warm breezes making it an easy walk through the nature trails. 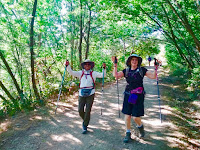 We stopped at the Church of Saint James of Padron. 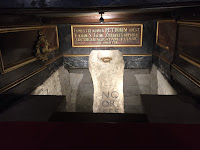 This is the place where the apostolic boat brought the body of Saint James from ”Haffa” in Palestine. The stone inscription at the bottom of the altar commemorates this event. We made our way to our hotel for our overnight stop. We covered 21km.
Notes: Caldas de Reis is a small town famous for its thermal waters. The town also boasts the church of St. Thomas a Becket, the only church in Galicia dedicated to the English Martyr. 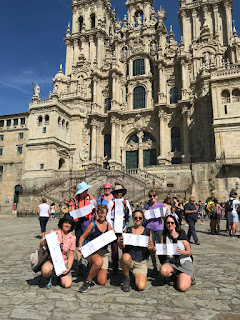 It was in the mid-afternoon of September 14, 2018 when our group walked into the Cathedral grounds of Santiago de Compostela. In the evening we attended the pilgrim‘s mass. At the end we witnessed the incense ceremony. WOW! That was a phenomenal experience.

We felt blessed with a sense of accomplishment. We did it! We covered 126km in six days.

It was a memorable journey. I had a very good walking buddy, who in the heat of the moment would spot butterflies or stroke laurel leaves or I would smell the jasmine flowers along the way. There was sun and more sun throughout the journey. I suppose it was our penance. 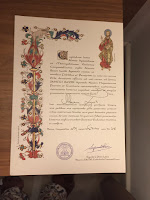 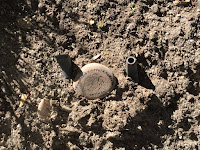 I received the Certificate/Seal of Approval inscribed in Latin upon completion of 126km.

My Nordic pole boot tips along with my peace stone are ”firmly” ensconced in Alameda Park just before the entrance to the Cathedral grounds.
Notes: Padron is rich in the tradition of St. James. It is here that he is said to have begun his ministry and it is also here that it is said the boat carrying the body of St. James back to Spain was tied up.  Legend has it that the boat carrying the Saint's body was tied to the stone called the Pedron, which is displayed under the altar of Padron's church of Santiago. 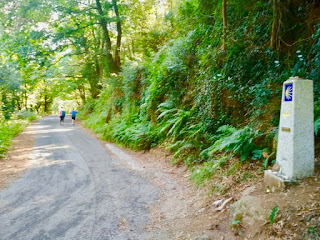 It was an amazing accomplishment of walking each day for a total of six days. Each time we entered the nature or dirt trails, I was at peace and assumed the reflective mode. The trek along the highways and streets were a bit disturbing that interrupted the peace of walking on the Camino.

When we walked into the Cathedral grounds, I felt nothing; it appeared to be a tourist trap. I felt disappointed and somewhat overwhelmed that there weren’t voices singing in my head or a sense of euphoria. There was something missing. There was definitely a sense of peace in the air. The various performers, hawkers, and shops selling a variety of souvenirs were clearly evident.

In conversation with some nuns, I was reminded that the Camino is a secular walk and that St. James didn’t walk this trek. Instead his followers or pilgrims walked the trek to Santiago de Compostela to embrace the statute of St. James and to receive the blessings from attending the Mass and sometimes be treated to the incense ceremony—this latter event was done occasionally and was meant to surprise the audience in attendance on that particular day.
Posted by Maria Lynch at 12:30 PM