I completed the last leg of the Portuguese Seaside Route. This first post outlines a bit of the history of the Portuguese Camino routes. The next post will describe highlights of my experiences of walking for a total of six days covering 126km. 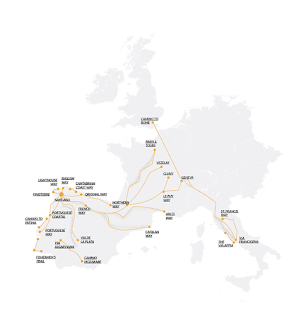 Historical Background of the Camino to Santiago Routes in Portugal

Such was the popularity of the Camino to Santiago in medieval times that a complex network of pilgrim routes through Portugal developed. Not all have survived the passage of time, although there is talk of reviving one or two of them as the Camino grows in increasing popularity. Nowadays there are a number of waymarked routes from Portugal to Santiago and often there is confusion as to which is which. The historic medieval pilgrim routes are well documented and researched. The main routes are:

The Central Route (Caminho Central): This follows much of the path of the Camino Real—the Royal Road. In medieval times it was, as it is today, the path most travelled by pilgrims and, as such, has the most developed infrastructure.

The Braga Way (Caminho de Braga): This old routes from Oporto passes through Braga, one of the most important cities in the history of the legend of Saint James, on the Iberian Peninsula. The route joins the Central Route in Ponte de Lima.

The Coastal Route (Caminho da Costa): This route came to the fore in the 1700s and was used by pilgrims living the coastal communities and those who arrived by boat at the many ports and fishing villages. It is an historic route not to be confused with the Senda Litoral – the Coastal Path, although the two routes cross at points.

The Seaside Route (Senda Litoral): In modern times, as holiday resorts have developed along the coastline of Portugal and Spain, so too have seaside paths. The Senda Litoral is not one of the Caminos to Santiago although many pilgrims do use this way. At points it crosses with the Coastal Route.

The Interior Way (Caminho Interior): This route starts at the Cathedral of Viseu in central Portugal and travels through Vila Real to Chaves, joining across the border in Spain with Verin and the Camino Sanabres from the south.

Credit to Johnnie Walker from the Confraternity of Saint James in the UK. This information was included in our Holiday Pack sent by the tour company, Camino Ways.

Day 1: Saturday, September 8, 2018 – Baiona, Spain
Day of Orientation and overnight stay at Hotel Bahia, located outside the centre of Baiona. We had a briefing session with our Tour Leader.

At this point of the Portuguese Coastal Camino route, we had a choice of walking along the coastal or seaside route. Our group chose the seaside route. The next day we began walking from this town of Baiona. 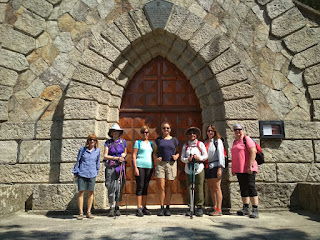