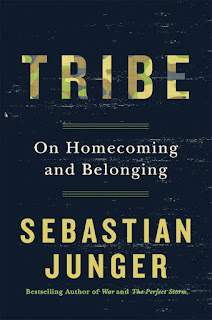 Sebastian Junger, author of Tribe, takes the reader on a discovery journey depicting the way our ancestors lived as hunters and gatherers. Each tribe cooperated and shared, thus enabling strong cohesion among the people in the tribe. There was no evidence of poverty and no accumulation of wealth. They were nomadic and hence it didn’t make sense to accumulate possessions or property. It was an era of a classless, egalitarian society.

Junger relates this kind of living to the lifestyle of the aboriginal people of America where there is solid evidence of community living within the group. The reader is exposed to the merits and despite the cruelty of this kind of lifestyle it is a cohesive group who care for each other as a group. As Western society descends into an agrarian and industrialized society it becomes more and more individualistic and less and less of a community that gives rise to loneliness, depression and serious health issues.

Surprisingly, Junger writes that during the wartime, the soldiers act as a community and look out for each other even in the most dangerous of times on the battlefield. There is comradeship on the battlefield that is not evident on their return home from a tour of duty. These soldiers feel alienated once they return home that results in the rise of post-traumatic stress disorders and other health issues. They do not feel they belong and feel alienated as they try to adjust to being home. They do not feel they belong to the country that they were willing to die for.

Throughout, Junger illustrates, with specific examples, how and why there is a sense of belonging within a group. In addition, he explores the downfall of modern western society that drifts its people away from a community lifestyle; instead the focus is on accumulation of wealth in an individualistic manner. Yet the modern conveniences are a source of more comfort and ease of living than our ancestors experienced during the hunter/gatherer era of the past.


Tribe is an excellent rendition of what it means to belong to a group and country.
Posted by Maria Lynch at 9:42 AM