Book Review: A Bird on Every Tree by Carol Bruneau - Short Stories 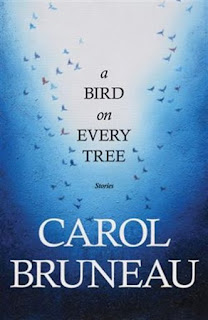 A Bird on Every Tree, the third collection of stories from Carol Bruneau, is even more impressive. While rooted significantly in Halifax, where Bruneau lives and teaches, the stories in A Bird on Every Tree are expansive, both geographically and chronologically. “The Race,” the first story in the collection, puts the reader inside the mind of distance swimmer Marion Lester as she competes in the “world’s longest-ever mixed saltwater race,” driving herself not only against her opponents but her own past.

The past is also the subject of “The Vagabond Lover,” perhaps the collection’s strongest story. Focused on the last days of Dolly Cutler, dying in a bed with a view of the Newfoundland ferry, the story spans decades, teasing out details of a doomed love and the power of literature, before climaxing with an emotionally devastating final scene. To Bruneau’s credit, the story, which could have felt maudlin or sentimental, instead feels simply true.

That sense of fictional truth is key to the success of many stories in the collection. “Burning Times,” which chronicles a middle-aged couple’s whistle stop in Florence, focuses on Keith, for whom a small incident has life-altering overtones, while “If My Feet Don’t Touch the Ground” draws together family dynamics, the music business, and the legacy of the Second World War in contemporary Berlin. Bruneau treats her characters with a compassionate clarity, often understanding them more than they do themselves. “Crotch Rockets,” for example, seems to focus on the reunion of former lovers Roz and Rannie after 26 years, but reveals itself to have been about something – and someone – else entirely.

Bruneau’s writing rarely calls attention to itself, but this is a bravura performance: there is nothing simple about the prose, nothing rudimentary. Rather, a close examination reveals every sentence to be carefully crafted, with an attention not only to sense and sound but character and place. As a result, every story feels unique and spontaneous, genuinely surprising. The style of “Crotch Rockets,” for example, would be calamitous if applied to “If My Feet Don’t Touch the Ground” – and vice versa. This is no mere exercise in voice: this is a reflection of a writer utterly in touch with her stories – not only what they are, but how they are, overlooking nothing in her craft. Bruneau is a master. We should know this by now, but A Bird on Every Tree is a powerful reminder.