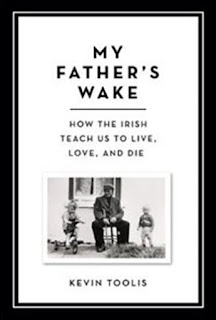 In his book, My Father's Wake: How the Irish Teach Us To Live Love And Die, Kevin Toolis brings to the surface the concept of death and dying and how it has evolved over the centuries. Toolis describes his personal experiences as he takes the readers back to his home in Ireland to witness the Irish way of coping with the dying and death. Below is the Kirkus Review:

"A gut-wrenching exploration of death from an Irish perspective.

Journalist and award-winning filmmaker Toolis (Rebel Hearts: Journeys Within the IRA's Soul, 1996) centers this work in his ancestral homeland, a small village on an island off the west coast of Ireland, where his father died of cancer at home. The author has spent a lifetime exploring death, beginning with his own brushes with it—first as a patient in a tuberculosis ward and, later, through his brother’s excruciating and untimely death from cancer. The author went on to use journalism to explore violence, especially from a religious or political perspective; he has covered the Arab-Israeli conflict, North African fighting, and the Troubles of Northern Ireland. His experiences have left him with a fascinating view of what most of us try not to consider: the end of life. His own father’s death, and the wake that ensued, ground his thoughts on the subject. Throughout, Toolis rails against “the Western Death Machine.” In Europe and North America, he writes, we remove death from the private sphere and place it in the hands of “experts,” ranging from coroners to funeral directors. “We need to find our way again with death,” he writes, noting that for thousands of years, humanity dealt with death in healthier, more fulfilling ways. He sees in the Irish wake a pattern to emulate, a remnant of ancient methods of handling the mourning process that brought dignity to the dying and closure to the living. This book is not for the faint of heart, as the experiences he shares will leave readers emotionally raw. It is unquestionably rewarding, however, a thought-provoking argument against a sterile and industrial view of death.

From the graveside of an Irish Republican Army execution victim, whose young son cries inconsolably at his loss, to that of the author’s own father, Toolis provides a series of intimate, eye-opening visits with the end-of-life process." Source: Kirkus Review.
Posted by Maria Lynch at 9:27 AM