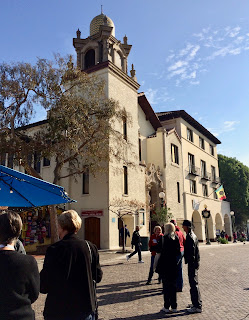 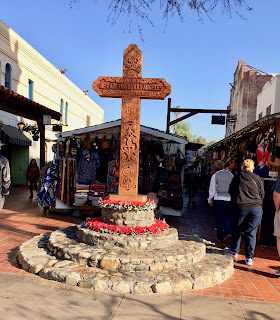 As we drove towards Hollywood, we spotted the Los Angeles City Hall--the pyramid shaped building in the mage below:
Onwards to Hollywood. We stop at the famed Dolby Theatre where the Oscars event is held and strolled around the complex to catch a glimpse of the Hollywood sign. While walking around the complex I snapped a picture of this saying carved along the pathway along with other sayings from different artists.

Our tour takes us to part of the pathway that has the different stars of fame. Below is the one for the Beatles' stars.

We stopped for lunch at the Farmers' Market and then we strolled along the street browsing through all the stores and shops along the way.  Back on the bus we headed onto the La Brea Tar Pits and Museum.  We saw the tar bubbling in the lake while the Museum with all its animal fossils were displayed in the Museum.


We drive back to the hotel for an early New Year's Eve celebration in anticipation of being at the Tournament of Roses Parade on January 1, 20`8.