The next part of my time in Ireland begins on September 10, 2017 when I hop onto a bus to tour the South - South West of Ireland. We are a small group on a small bus. Our driver/tour guide, Patrick Foley, takes us from Dublin heading West through farmland and peat bogs of counties Kildare and Offally. In our introductions, Patrick is curious about the origins of our surnames; each one of us tell our stories. We stop to take a peek at the bogland as Patrick explains how these peat bogs are harvested, dried and used as fuel for heating the homes; today there are yet a few who have not converted to electricity.


We arrive in Kilbeggan to take in the Lockeas Distillery, the oldest legal whiskey distillery in the world. We sample the varieties. I stop at the House of Names only to discover that my maiden name Joanes originates in Spain or more correctly Iberian; I buy the scroll with a crest. We continue our drive further west. We stop to explore the ancient site of Clonmacnoise.


As we head West for Galway we make a traditional pub lunch stop in Shannonbridge overlooking the Shannon River. As we continue on the bus, we arrive on the outskirts of Galway.


As Patrick takes us around showing the sights of Galway and meanders along the Promenade facing the Wild Atlantic Ocean, he tells us the story about the prominent Mayor Lynch of Galway who was also the Magistrate at the time.

He tried his son for murdering a Spaniard who apparently was dating a lady that his son had eyes for; his son was sentenced to execution. The townspeople came out in support of his son and tried to prevent the execution.

Hence the term "Lynch mob." Since none of the executioners would carry out the order, Mayor Lynch himself executed his son and thus the term "lynching" came about. This is one version of the events as told by our guide Patrick and can be considered to be one of the many interpretations of what really happened way back in the late 15th century. Thus we were treated to many a story or legend  during our trip. Patrick is a captivating  story teller.

The next day we depart Galway for the Burren, a beautiful land of limestone pavements, barren hillsides, rare flora and early settlements. We spend some time viewing the Cliffs of Moher.


It was a very, very windy day but as our guide would indicate at least there is no fog and you can actually see the Cliffs. It was a wondrous sight.

We visit Corcomroe Abbey that was founded by the Cistercian monks in the late 12th century. Then we view the Portal Tomb. There is ancient history in Ireland.

Later that afternoon we take the ferry to travel into County Kerry to Killarney. We spot a beautiful rainbow gracing its presence for us all to absorb and enjoy.


We explore Dingle Peninsula where there are many ancient forts and early religious monuments. To stretch we take the time to walk along the sands of Inch Strand in Kerry. It is very good to feel the strong wind and inhale the sea air. Here comes another sight, Prehistoric Dunbeg Fort, a promontory fort built in the Iron Age.

We spend time in Dingle Town which is a fishing town with the homes brightly painted in a variety of colours that enable the fishermen to recognize their arrival home while at sea.

On the night of Tuesday, September 12th we are treated to a spectacular show The Celtic Steps. A variety of Irish Celtic dance steps performed by the youth who are known Irish Dance champions in Kerry. Also we witnessed Irish drumming and the captivating story of this particular show.  It is meant to maintain Irish culture and hand down to future generations the Irish culture of dance and music. It was a memorable show.

The next morning we are on the road again, driving around the Ring of Kerry that is a classic route consisting of views of Ireland's highest mountain. Beautiful views of Lakes of Killarney.

We visit Derrynane House which was the home of Irish politician and liberator of Ireland, Daniel O'Connell. Today it is part of a 320 acre Irish National Park. 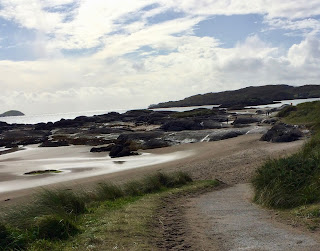 The view on the right is taken at Derrynane Beach.


Also in County Kerry we visit a sheep farm where the owner demonstrates how he and his dogs round up the sheep.  We make a quick stop to view Torc Falls.

On our last day of this tour we drive through Cork for a stop at Blarney Castle and no I didn't kiss the Blarney Stone. By myself  I couldn't climb the steep 100 narrow and ancient stone steps with no hand rail. A few of us opted out of this sojourn up.

I discovered this is one of those "tourist trap" things. Apparently when you kiss the blarney stone you will be blessed with the "gift of the gab." Instead, I stroll through the beautiful gardens on the grounds of Blarney Castle. Near the Castle, the strollers are graced by the music from the bagpipes.

Kilkenny is our time for another break. We visit Kilkenny Castle that looks onto River Nore, walk along the main street and quickly walk through The Medieval Mile Museum that represents an immense treasure trove of artefacts dating back more than 800 years of history.

We end our tour in Dublin in the early hours of the evening. it was a packed tour of the three of the four provinces of Ireland that deserves another more concentrated tour of each of these provinces. We toured Leinster, Munster, and Connacht that didn't include the province of Ulster.

The black-marked part of the map illustrates my tour from the Irish Sea to the Wild Atlantic Ocean and back to Dublin. 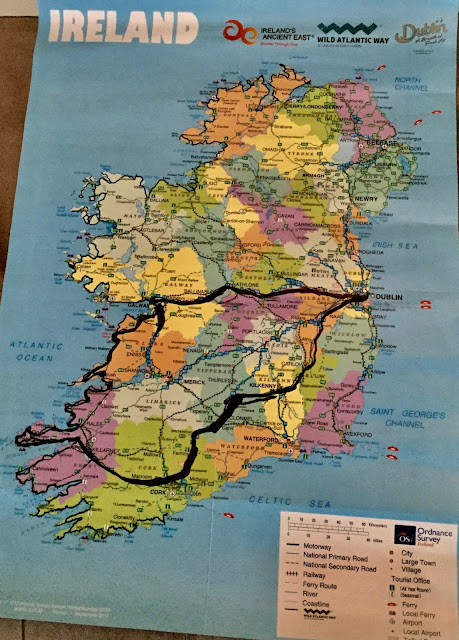