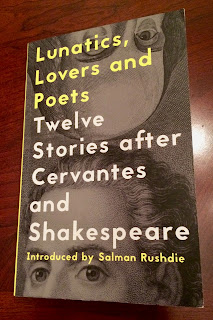 In his introduction, Salmon Rushdie describes the historical significance of the iconic writers, Cervantes and Shakespeare on their 400-year anniversary. Both these men never met each other but individually inspired the citizens of their era and continue to do so today. Rushdie gives the reader a glimpse of the impact of their writings in the sphere of literature.

Six of the stories are translated from Spanish writers who portray their influence of Shakespeare in the form of their six stories; the authors are Juan Gabriel Vasquez, Yuri Herrera, Marcos Giralt Torrente, Soledad Puertolas, Vicente Molina Foix, and Valeria Luriselli. The other six stories are from English writers who shape their stories from their understanding of the work of Cervantes; the authors are Ben Okri, Kamila Shamsie, Nell Leyshon, Hisham Fatar, Doborah Levy, and Rhidian Brook.

Each story is different and includes fantasy, imagination, drama and a sense of reality within the many spheres of today’s world that encompass the writing style of each of these twelve authors. Their stories bring forth their individual enthusiasm of Shakespeare and Cervantes. Some are implicitly an inspiration from Cervantes or Shakespeare while others are subtle and lets the reader reflect on how the story came from the impact of one of these two iconic writers.

The short story collection entitled Lunatics, Lovers and Poets: Twelve Stories after Cervantes and Shakespeare is a treasure trove.
Posted by Maria Lynch at 8:41 PM