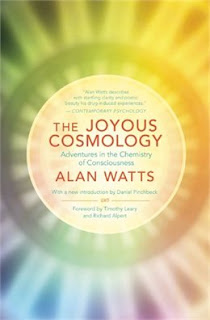 This review is sourced from http://ow.ly/zoAH3041az6 My comments follow at the end of this review.

The Joyous Cosmology is Alan Watts’s exploration of the insight that the consciousness-changing drugs LSD, mescaline, and psilocybin can facilitate “when accompanied with sustained philosophical reflection by a person who is in search, not of kicks, but of understanding.” More than an artifact, it is both a riveting memoir of Watts’s personal experiments and a profound meditation on our perennial questions about the nature of existence and the existence of the sacred.

The Joyous Cosmology is a verbal arrangement describing experiences for which our language hasn’t vocabulary. To understand this wonderfully difficult book it’s useful to make the artificial distinction between external & internal. This is exactly the distinction it wants to transcend. But Watts plays the verbal game in Western language. Readers can be excused for following along with conventional dichotomous models.

External & internal. Behavior & consciousness. Changing the external world is the genius & obsession of our civilization. In the last two centuries Western monotheistic cultures have faced outward & moved objects about with astonishing efficiency. More recently our culture has become aware of a disturbing imbalance. We’ve become aware of the undiscovered universe within, of uncharted regions of consciousness.

This trend isn’t new. The cycle has occurred in many cultures & individuals. Material success is followed by disillusion, basic “why” questions & then by the discovery of the world within—a world infinitely more richly complex than the artifactual structures of the outer world, which are, in origin, projections of human imagination. Eventually, the logical conceptual mind turns on itself, recognizes the foolish inadequacy of the systems it imposes on the world, suspends its control & overthrows the domination of cognitive experience.  Source: http://ow.ly/zoAH3041az6

My Comments: Joyous Cosmology was an interesting read that left me curious. It was technical at times but the images were profound and opened up a new trend of thought for me. The Epilogue and Appendix added to the understanding of what was portrayed in this book.