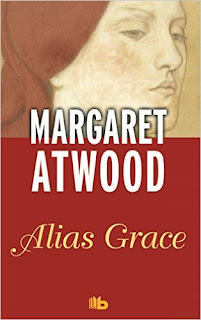 The author, Margaret Atwood describes this novel as fiction based on reality. It is a story about Grace Marks who was convicted of murder in the mid 1800s in Toronto and was sent to the Kingston Penitentiary for almost three decades.

The novel is set in Toronto and Richmond Hill where Grace Marks is a servant in these two households of well-to-do families. The author describes the lifestyle of being a servant within a household. Grace and her servant colleagues become friends, and treat each other in a typical manner in a work environment—sometimes with deep affection while other times with spite and animosity.

The novel commences with Grace’s parents moving to Canada from England for a better life. Tragedy unfolds while at sea but the family starts a new life in Canada. Through further mishaps, Grace leaves her family and works as a servant for a family in Toronto. Further tragedy occurs while in this household and eventually Grace settles with a family in Richmond Hill. Mr. Thomas Kinnear the master of the household is murdered as well as his mistress, Nancy Montgomery who is also the head servant of this household. Grace and her servant colleague James McDermott are accused of these murders.

The story unfolds with detailed descriptive settings of these two households and the personalities involved in the story which makes it a tedious read. The story is told from Grace’s perspective and during her time in the penitentiary. It has a happy ending of sorts.
Posted by Maria Lynch at 9:32 PM