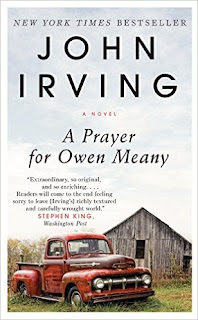 A PRAYER FOR OWEN MEANY is a fascinating book, but it won’t be for everyone. Irving has indeed created an odd couple of characters: Owen Meany, the dwarfish youth with high-pitched voice of stunning self-importance that wavers between arrogance one moment and self-sacrificial lamb of God the next, and his sidekick Johnny Wheelwright, illegitimate child of a striking, freespirited woman soon killed off by a baseball Owen accidentally slams across the baseball field during a Little League game to hit its killing blow against her temple. Not that this would destroy the odd friendship of these two. Indeed, it bonds them for life.

As for Owen, he doesn’t believe in accidents, especially not this one. What transpires through the remainder of the story, tracing the lives of these two from children into adulthood, is a complex weave of seeming circumstance into eventual climactic conclusion that rather neatly ties many loose threads together into a tight knot. Owen has foreseen his own death by a visionary dream, and he never doubts, at least not until the final days of his life, that this dream is the beacon guiding him home (home being, for Owen, heaven for those who would enter through the gates of martyrdom).

In the process of these two strange lives, topics of destiny and fate, religion, American politics and foreign policy, various rites of passage from childhood into adulthood, and other miscellaneous lighter and deeper issues are undertaken. These, too, all come together into the neat knot at the book’s end.

Added comments from Maria Lynch: This was a book with many twists and turns that were disturbing and difficult to comprehend. As Waddleforth states above “…it won’t be for everyone.” I agree it was not for me.
Posted by Maria Lynch at 4:01 PM