On Wednesday, June 15, 2016 I boarded the bus for a day trip to discover the history, sights and tastes of Northumberland County that is located about an hour away from Toronto. We arrived in Cobourg to taste the Royal Winter Fair award winning butter tarts from Betty’s Pies and Tarts bake shop; they were sweet and delightful. From there we checked out the Burnham Family Farm Market sampling the different jams, jellies and pickles along with purchasing some produce. We walked along the main street of Cobourg dropping into the bakeries, a chocolate factory and a shortbread bake shop; all very yummy.

But it was most memorable to see and learn about the history of the County of Northumberland. In 2001 the Provincial Government of the day turned Cobourg, Warkworth and Campbellford to one amalgamated Trent Hills as did many other parts of Ontario including the mighty City of Toronto.

Cobourg boasts famous Canadians. Ebenezer Perry (September 29, 1788 – May 1, 1876) was a politician and a merchant. He fulfilled his duties as a militia man during the War of 1812. He became a resident of Cobourg in 1815 where he settled down by building a grist mill and throughout his time he became involved in a variety of investment projects. In 1835 he built an elegant residence known as Woodlawn that has survived the test of time and is now refurbished to house an elegant hotel and restaurant. We paused there for a sumptuous lunch.

Egerton Ryerson (March 24, 1803 – February 19, 1882) has his roots in Cobourg. As a Methodist minister and educator he founded Victoria College which is now part of the University of Toronto. Also in the City of Toronto the Ryerson Polytechnic Institute became Ryerson University.

Sir Sandford Fleming, (January 7, 1827 – July 22, 1915) an immigrant from Scotland settled in Cobourg. He was known as an inventor—part of being an engineer. He designed the first Canadian postage stamp and left an an indelible mark on surveying and map making along with playing a prominent part in engineering the railway from the east to the west of Canada. Sir Sandford Fleming College of Arts and Technology has a campus in Cobourg, Peterborough, Haliburton and Lindsay—all within the broader area of this part of Ontario. 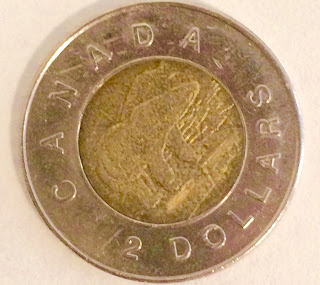 Our trip took us through the fields of corn, hay and canola with a peek at the Communications tower of the Warkworth Institution that is a medium-security prison, and a drive through Campbellford where the local residents of the area shop and mingle. We spotted the residence of Brian Townsend, the artist who created the portrait of the polar bear on one side of the toonie—our Canadian two-dollar coin.

We glimpsed the Trent Water Canal system, were driven over bridges that eventually brought us onto the highway towards home.

I returned that evening with a sense of pride and belonging to a country that has its rich history scattered in the towns, villages and cities from coast to coast to coast.
Posted by Maria Lynch at 8:53 PM