Book Review: A Student of Weather by Elizabeth Hay 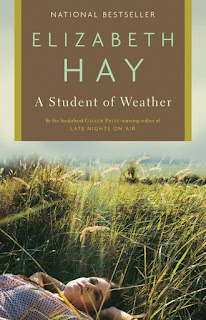 Elizabeth Hay in her novel A Student of Weather focuses on a family living on a farm in Saskatchewan. They are a family of three—two daughters, Lucinda and Norma Joyce and the father, Ernest. They interact with Maurice Dove who is on a research study in Saskatchewan. Eventually the reader learns that the mother died and so did a brother.
Lucinda is attracted to Maurice and so is Norma Joyce who is only nine years at the time. The reader is exposed to the interactions among the family. Then comes Maurice who brings some excitement to this family. He is from Ottawa and is sent on a research study to Saskatchewan.

It is a tale that is sometimes difficult to follow as it is written in a style that encompasses a monologue and repetitive descriptions of what is evident in the scenes deftly created by the author. The reader is introduced to the flatlands of the Prairies, its weather patterns which has an enormous impact on the lifestyles of the farmers like Ernest. On completion of his study Maurice returns to Ottawa. During his time in Saskatchewan he becomes a regular feature in the lifestyle of Ernest and his two daughters.

Hay then moves the setting to Ottawa as Ernest has inherited a property from his brother living in Ottawa. There is a re-connection with Maurice Dove in a strange but intriguing manner. Norma Joyce is fallen deeply in love with Maurice that leads the reader to figure out this relationship. Maurice moves to New York City on a work assignment. Norma Joyce runs away from her family in Ottawa and lives in New York City. She wants to become part of Maurice’s life. Once again the reader is treated to life in New York City during the 1930s. Eventually Norma Joyce returns to Ottawa to stay. There are changes within her family.

Throughout the novel, Hay creates sentences that are profound and sometimes lighthearted. As a reader, it gave me pause even though I was confused with some of the scenes and could not easily follow the stream of consciousness style of writing adopted by Elizabeth Hay.
Posted by Maria Lynch at 6:17 PM