Book Review: A Town Like Alice by Nevil Shute

A Town Like Alice by Nevil Shute is a story about a young Englishwoman, Jean Piaget, living in Malaya during the second world war. She is captured by the Japanese and finds herself marching with several other women and children on a death march for many months in the Malayan Jungle. Many of them die, but she survives. 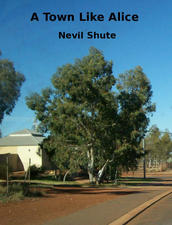 Shute, in voluminous detail, takes the reader through the plight of the women focusing on Jean. After the War, Jean returns to England, leaving behind the horrors of her Malayan experiences. When she receives a healthy inheritance she returns to Malaya to give back to the women who helped her survive. Her travels take her to Australia to a town called Willstown. Here she meets up with an Australian who had helped her and the women during their march in Malaya. She decides to stay in Willstown where she encounters various challenges as she finds love, gets married and sets about to change this outback post.

It is a fascinating read, but there are too many details that makes the story tedious at times.