Book Review: The Elegance of the Hedgehog by Muriel Barbery 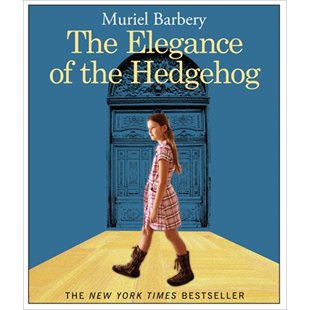 Le Figaro has described this book as 'the publishing phenomenon of the decade'. Elsewhere, there were comparisons to Proust. It sold more than a million copies in France last year and has won numerous awards. Does it match up to the hype? Almost. It is a profound but accessible book (not quite Proust, then), which elegantly treads the line between literary and commercial fiction.

The story flits between the confessions of two women: Renée Michel, a 54-year-old concierge in a Parisian block of luxury apartments, and Paloma Josse, a precocious 12-year-old girl, the daughter of one of the most bourgeois families in the house. Paloma has decided that life is meaningless and is making plans to commit suicide on her 13th birthday.

The reader knows from the beginning that the two of them have more in common than they realise. But Renée must maintain her lowly position in the pecking order so that she can keep her job: she is an autodidact who adores Tolstoy, is a devotee of Japanese cinema and listens to Mahler. The inhabitants of 7 Rue de Grenelle would, apparently, be scandalised if they found out that their lonely, dowdy concierge was getting up to all these intellectual high jinks. Plus, Renée just wants to be left alone and has no desire to become the eccentric object of everyone's curiosity. 'To be poor, ugly and, moreover, intelligent condemns one, in our society, to a dark and disillusioned life, a condition one ought to accept at an early age.' So she pretends to be far more stupid than she is. The upstart girl and the concierge are drawn together when the celebrated restaurant critic upstairs dies. A cultured Japanese man takes the apartment and shares Paloma's fascination with Renée. They decide that the concierge has 'the same simple refinement as the hedgehog: a deceptively indolent little creature, fiercely solitary - and terribly elegant.'

All these strands provide Muriel Barbery - a Paris-born one-time philosophy teacher who now lives in Japan - with the opportunity to explore her favourite theme: philosophy as applied to everyday life. This element at least in part explains the attraction of the book in France, where philosophy is still a compulsory subject and most people have a basic knowledge of the great thinkers in a way we don't in the UK.

Despite its cutesy air of chocolate-box Paris, The Elegance of the Hedgehog is, by the end, quite radical in its stand against French classism and hypocrisy. It's intriguing that her compatriots have bought into it so enthusiastically. Clever, informative and moving, it is essentially a crash course in philosophy interwoven with a platonic love story. Though it wanders in places, this is an admirable novel which deserves as wide a readership here as it had in France.

Comments from Maria Lynch: I particularly found this novel very interesting and a good read because of its philosophical themes throughout the novel.