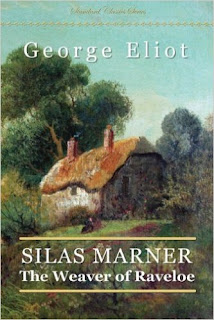 The author George Eliot (pen name for Mary Ann Evans) writes a story about a linen weaver. His name is Silas Marner living in Lantern Yard in England. He is accused of stealing money from the congregation’s fund and leaves town in disgrace. He finds his way to the village of Raveloe where he lives as a recluse. He is mostly ignored by the village folk; but with his loom he weaves linen for the ladies. In time he accumulates gold guineas in payment for the fine linen. He is thrilled by this accumulation of gold coins and every night he counts them and then puts them away in a leather pouch hidden under the brick floor in his humble cottage.

Eliot cleverly plots out the simplicities of village life distinguishing between the Squires in the village and the ordinary folk like Silas Marner. The reader is taken through the snippets of these different lifestyles and yet they live in harmony in the village. There is suspense and mystery when Silas finds his gold coins are stolen from his cottage. There is no solving this robbery. The author adds more mystery by introducing the arrival of Eppie, a toddler with golden hair curls warming herself by his fireplace. Eppie’s mother is found frozen to death nearby and since there is no claim on Eppie, Silas raises her with the help of a neighbour, Dolly Winthrop. Over time the mystery of the robbery is solved and Eppie’s birth father is revealed which does not change for Eppie despite every effort by her birth father to re-connect with her.

This novel is written in the early 19th century and yet the plot, suspense and mystery are clearly evident. It takes the reader back in time to an era that a reader can realistically experience life in a village in England through the vivid descriptions of the landscape, its inhabitants and their lifestyles.
Posted by Maria Lynch at 9:21 AM