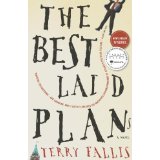 In Best Laid Plans the reader is taken on a humorous ride to witness the inner workings of the political election machine. The narrator, Daniel Addison resigns from his position as speechwriter for the Leader of the Opposition of the Liberal Party of Canada to teach at the University of Ottawa. But to maintain his loyalty and allegiance to the Party he will find a candidate to run against the Government’s Minister of Finance in a nearby constituency just outside Ottawa.

As events unfold in the most unpredictable manner, the Professor is elected and actually performs superbly as an MP. The constituents are listened to. Through the narrator the reader is given the true understanding of how democracy ought to be practiced. It is well done.

Fallis outlines a brilliant plot with an enormous amount of humor and, to a large extent exposes the inner workings of the political election machine. It is an easy read that will keep you laughing and smiling throughout the novel.