For our winter escape we decided to come to Panama. Way back in 1996, we did the Panama Canal Cruise and it was then that we promised ourselves that we would return to explore Panama. Now we are here; to live out our 2015 winter months away from the freezing temperatures of Toronto.

We arrived in Panama City, on January 4th to warm temperatures and refreshing ocean breezes. The flora and fauna are in full bloom amidst skyscraper type of buildings in the core of the city where we are presently staying. Across from our building there is a 2.5 km sea wall walkway which we use for our routine walk about in the sun as shown below. On this particular occasion we found ourselves in the Fish Market towards the end of the 2.5km walk. We stopped for a fishy snack. This Fish Market resembles other coastal towns in the world--Granville Island, Vancouver, Sydney, Australia, Mombasa, Kenya. 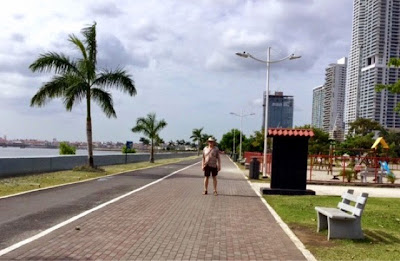 We needed to familiarize ourselves with the city and its environs and thus we hopped onto the City Sightseeing tour bus. This was an eye-opener for us.

We observed that Panama City is engulfed by the skyscraper type of buildings; some of which are unique in design as shown below. Apparently, most of the condo buildings, in the core of the city, are owned or rented by Canadian and American expats. This is a modern, bustling city with the usual highways and byways through the city. As one American expat said to us, "pedestrians are invisible, so be aware." 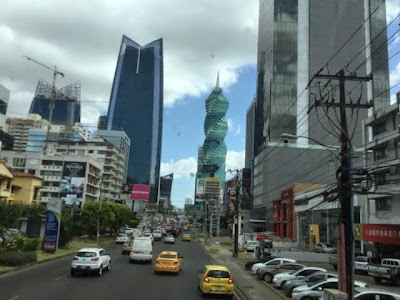 On our tour of the Panama Canal, we were impressed by the fairly new development of the Canal area. The four level museum on one side of the Canal relates the history of the Canal. Whilst on the Terrace of this facility we were able to observe the two lane waterways of the Canal with locks and all. Unfortunately there were no ships transiting through the Canal during our visit. It brought back very pleasant memories of 1996 when we cruised through the Canal. 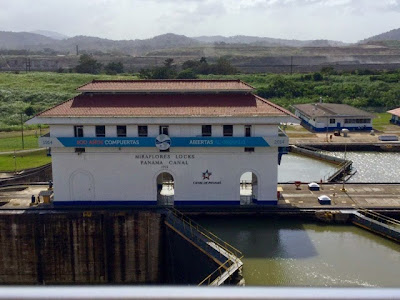 It is a whole day crossing and then on towards the wide Ocean with Bridge of America in full view. Today, this area is modernized as a tourist destination as shown below. 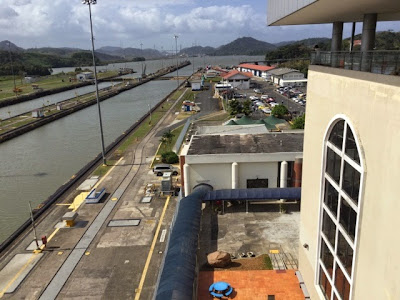 We have more exploring to do that will possibly include a train ride to Colon, on the Caribbean side of Panama and day trips to small towns in and around the beaches and mountains. Bouquete is where the Canadian expat community have taken residence but some are in Panama City along with a significant number of American expats. Stay tuned!
Posted by Maria Lynch at 8:38 PM