The weekend after the terrorist attack of Paris, we were invited to attend a Je Suis Charlie rally at Plaza de Francia in the historic district of Panama. French dignataries were present, speeches were made and wreaths were laid in honour of the fallen from this Paris terrorist attack. 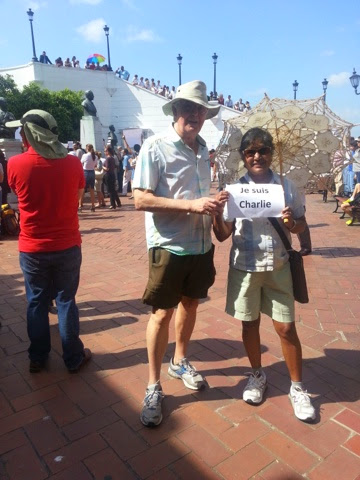 In our exploration of Panama, we spent a morning at Panama Viejo which is the original city of Panama that is about a 10-minute Metro bus ride away from the core of the modern city. We strolled through the Museum that highlights the origins of Panama. It was founded by the conqistador Pedrarias Davila in 1519. On another plaque we read that Sir Henry Morgan, a Welsh Privateer (a legal pirate) fought for England and viciously attacked and destroyed Panama in 1671 coming from the Caribbean side of Panama.

We then walked along the ruins of Old Panama City as we witnessed the markings of the layout that illustrates the impact of the convents, churches and residences of the settlers . There are remains of the original tower of the Cathederal along with smaller churches within the area.

Alas, our stroll was interrupted by some heavy rain drops descending on us. We quickly sought shelter in one of the Churches with a renovated roof top. We lingered for a while until the rain stopped and then continued our walk through history to its very end of the area. There being no place to stop for a bite to eat we made our way home via the Metro Bus.

On yet another morning, we continued our historical visit; this time to the historic district of Panama. We learn that within two years of Morgan's attack and destruction of Panama Viejo, in 1673 the town was moved about 7 km to the southeast which is now known as Casco Antiguo.

This is a thriving historic district with well marked out boulevards of the period with ancient looking cathedrals, churches, and gathering places known as plazas flanked by a variety of eating places and souvenir shops. Tourists abound as we stroll through the boulevards, sit on the benches in the different plazas taking pictures of these historic sites and having lunch in one of the quaint eateries. 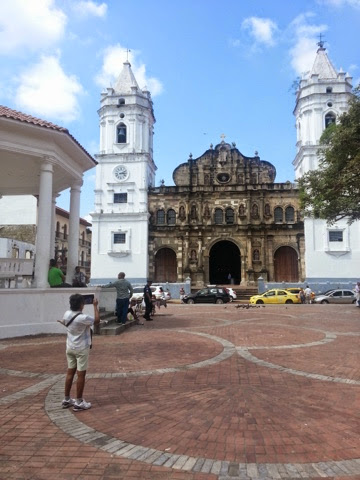 Above is a dramatic image of the old Church propped up by the newer pillars of the Church. I'm in awe as I absorb this unique restoration.
Posted by Maria Lynch at 4:48 PM