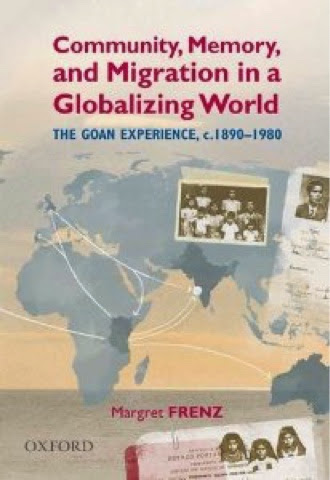 Margret Frenz, in an academic treatise, entitled Community, Memory, and Migration in a Globalizing World The Goan Experience, c. 1890 - 1980 writes about a community of people who originate from Goa, India. These people are colonized by the Portuguese and due to lack of industrial development are required to seek employment outside of Goa. Frenz follows their migrations to East Africa and then onto the UK, Canada, and back to Goa during the period of 1890 - 1980.

In the first chapter the author extensively details her methodology of research with ample descriptions of the context of this study as well as interviews with nearly 300 people of Goan origin. Community is defined to illustrate the author's focus of studying this group of people. Frenz puts forth an understanding of how the Goans adapt from a Portuguese colony to a British colony within East Africa.

Through the remaining six chapters the outcomes of the research reveal the rationale for crossing the Ocean to East Africa and despite the segregation polices of the British colony the Goans make a good living in East Africa, better than they would have had in Goa. The Goans are Catholics and that sets them apart from the other South Asian groups in the eyes of the British rulers but only to a certain extent while at the same time not being afforded equal rights and opportunities as the Europeans due to the segregation policies. The Goans create community becoming involved in the Church, founding their own schools and clubs as Frenz alludes to a sense of planting roots in East Africa. There are descriptions and quotes from interviews about the caste system and the social status within the Goan community that are reluctantly and cautiously brought forth.

Then change happens, the East Africans vigorously work towards gaining independence from the British. The Goans are in a dilemma. Do they become citizens of the respective East African countries of Tanzania, Uganda and Kenya or do they take on British passports or Portuguese passports? Large numbers leave East Africa. Their whole sense of community is disrupted as they now make the move out of East Africa to the UK, Canada or back to Goa. Frenz highlights the Goans as being global citizens mainly from the interviewees who claim this status. This second migration is a difficult one as the Goans are pulled apart in different directions. The Goans try once again to make community but it is not the same as it was in the East African countries. In the last chapter, before the Conclusion, Frenz describes Remembering East Africa through quotes from the interviewees. She writes this chapter within the framework of the meaning of nostalgia, and revering the past.

The conclusion validates the premise that the Goans migrated to East Africa to create permanent roots, but the new politics of independence coupled with the Africanization and Nationalization policies steered the Goans to migrate once again. Frenz stresses that despite their reverence for East Africa the older Goans have come to terms with their new life in the northern hemisphere. Their children and grandchildren have adapted very comfortably to this new lifestyle as they know no other kind of lifestyle.

As a Goan from Kenya, and now a Canadian citizen, some of the anecdotes resonated with me and the descriptions of the East African Goan lifestyle were familiar. It was good to note Frenz' attempt to bring out the skeletons from the Goan closets of caste and social status within the community. Margret Frenz has given the future generations of Goans a snippet of their social history for the period 1890 - 1980.
Posted by Maria Lynch at 4:48 PM