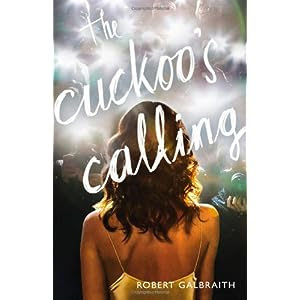 The Cuckoo’s Calling by Robert Galbraith aka J. K. Rowling. The main character, Strike, is a PI recruited to solve the suicide death of the model, Lula. The press reports claim that she plunged to her death but her brother, believes she was murdered. Strike has to prove it is a murder and find the murderer even though he is skeptical that it is a murder.

There is suspense and intrigue in this novel. The reader is inundated with details at various levels. Each scene is vividly described with details of furniture, décor and atmosphere. Strike’s personality and lifestyle are laid out graphically to the point of feeling sorry for this individual. Strike comes across as a pathetic yet heroic person. He did a tour of duty in Afghanistan. Hence, there are flashbacks to his time in the war zone. These parts added some confusion but brought some depth to the character and not so much to the story.

Robin, his secretary, assigned to him by a temporary agency brings sanity to his life. Her presence motivates him to spend the time and energy on this one and only case he has to solve. There are no other cases on his list. Robin likes investigative work and puts her heart and soul to helping Strike solve this case.

The author takes the reader through the streets of London, England and through many surprising outcomes that eventually leads to resolving this case in an unanticipated manner.
Posted by Maria Lynch at 8:12 PM