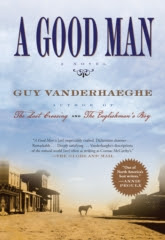 A Good Man by Guy Vanderhaeghe is a historical fiction set in the late 19th century. The reader is taken back to the time of Custer’s defeat when Sitting Bull enters Canada and hence ensues the battle conflict between America and Canada. There are vivid descriptions of battlefield mayhem with references to war-like imagery of sunsets and moonlit nights.

Vanderhaeghe , through multiple characters, brings in the Fenian struggles within Canada that portray the uneasiness and rivalries that impact the people in the communities. The reader is exposed to the villain, Dunne, an unseemly character who gets into trouble and does also create deadly chaos. The main character and protagonist, Wesley Case is involved with these multiple characters weaving through battlefields, communicating with generals and at some point carving out a living for himself on a ranch while getting involved with a widow. All of these scenarios are intertwined throughout the novel taking the reader back and forth to mayhem, love, disappointment, and some form of unpredictable living in that era.
Posted by Maria Lynch at 9:30 PM