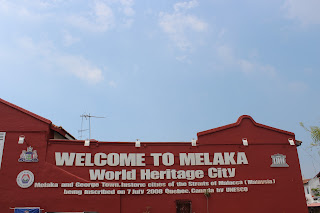 We arrived in Melaka via the VIP Coach Service from Singapore. It was a pleasant five hour ride to Melaka. Once settled in our accommodation, we did many walkabouts around the city. It is a world heritage city declared by UNESCO. There are many historic sites to explore to enable us to absorb the history and culture of this city; we will do our exploration during our second week here.


Melaka is a popular tourist site. Apart from us, we saw bus loads of tourists mainly from China with a sprinkling of walk about tourists from Europe, Malaysia, and Singapore. This city looks out onto the Melacca Straits and was an important trading post during the Sultanate era that predates the arrival of the Portuguese in 1511. The Melaka River runs through the city spilling into the Straits; in its heyday this River was a vital link to the people of Melaka; now it is a popular tourist river cruise.

Melaka, like the rest of Malaysia, is dominated by the Malay, Indian and Chinese peoples. Even though Jonker Walk takes you into Chinatown there are a variety of little shops and restaurants that serve a mixture of different Asian culinary delights. Some restaurants also offer a fusion of Melakan/Portuguese dishes on their menu. Other streets are a mixture of Indian and Malay representing their respective culinary fare and shopping. The three cultures are merged in many ways; a Malay mosaic of sorts.


As we did our daily walks, we learned that there is an expat British community who are happily living out their retirement years in Melaka. They have found their place in the sun!! We saw young Muslim women dressed in bright, colourful hijab with beautiful edging in embroider or sequins; very fashionable. They looked happy and were quite playful in their interactions with each other; typical teenage behaviour.


It is hot and very, very humid which made our usual trek to the Straits quite a challenge; sometimes we would only cover half the trek, only to return to the comfort of our accommodation or stop for a cold beverage in a restaurant or even take refuge in one of the shopping malls.
Posted by Maria Lynch at 8:44 AM