En route to Adelaide we drove passed a few wineries. The roads were long and appear to be never ending. There are a number of "power nap" rest areas. We make use of them as the need rises. It makes the driving easy and enjoyable. 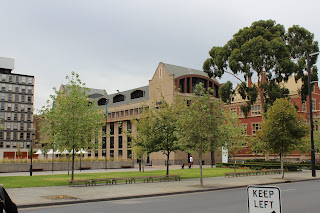 We spent the day in Adelaide roaming around the city. It is a spread out city with six lane boulevards throughout the city. It appears immense; we hopped on the connector bus and after an hour we got a good sense of the city. There are many historic buildings including some of the universities. The picture on the left shows the Adelaide University, Faculty of Law. 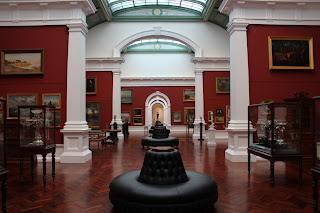 Our time in the Art Gallery showed us the works of the local artists depicting the landscapes and development of the city. The inside of the Art Gallery is beautifully designed. See the picture on the right.

The Central Market is very similar to the Granville Island Market in Vancouver or the St. Lawrence Market in Toronto; a place where you can purchase fresh produce, meat, poultry, fish, cheese, baked goods and even sit down for a meal or a beverage. We had a lunch break here; it was fun people watching.

After two nights, we left Adelaide for Hay, our next stop over for the night. Our drive to Hay took us along long winding roads. They looked like one ribbon after another in straight lines It appears to be the dust bowl of that part of Australia. The last dust storm was in 2009.

Tim commented on being on top of the world as he steered us through miles and miles of roadway with absolutely nothing in sight; I responded that we are at the bottom of the world, in down under country. It made us laugh. Six hours later, we arrive at our accommodation right off the highway. It is a rural farming town with its usual type of activity that one expects in a small town. The next day, we leave early, eager to get to the Blue Mountains area.