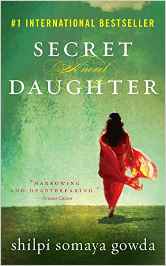 Shilpi Somaya Gowda’s novel, Secret Daughter, discusses the parallel lives of two families. One family lives in a village in India and the other lives in San Francisco, California. The family in the village have three children; the first two being daughters who are not welcomed in the family and are done away with. Gowda, explores this reality with heart-breaking truth by graphically describing the realities of giving birth to daughters in rural India. This family eventually moves to Mumbai to seek a better life for themselves and their only son. The reader is given the gruesome details of the difficulties of making a living in Mumbai—from abject poverty to a lifestyle of a somewhat Indian middle class.

The couple in San Francisco meet at medical school, he comes from Mumbai, while she is from America. Their life unfolds as they get married and attempt to have children. Through his mother’s contacts in Mumbai, they adopt an Indian girl from a Mumbai orphanage.

Through the exposition of these two parallel lives of these two families, the reader is illuminated on raising a family in America versus in India. The unique nuances surface as the reader learns about the usual trials, tribulations and joys of being raised in these two different countries. Within time, the adopted daughter traces her birth parents in Mumbai while spending sometime there on a scholarship from an American College. Her discovery enables her to face the true reality of her birth parents and why she was given up at the orphanage.

Gowda, succinctly brings forth the relevant issues as they are ensconced in the characters of this novel. A moving story.