Book Review: From Dictatorship to Democracy by Gene Sharp - Non-fiction 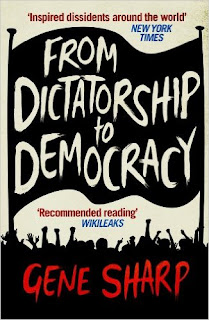 Gene Sharp in his book entitled From Dictatorship to Democracy, describes the realities of transitioning from a dictatorship to a democracy. He outlines the facts of confronting a dictatorial ruler; it is scary and terrifying and there are consequences that include fatalities. Freedom through violence is possible but has its own drastic consequences that do not always result in complete freedom and security. Ultimately, when confronting dictatorial rulers, it is important to face all the realities and truths of having to pursue these rulers to achieve democracy.

Sharp indicates how negotiations can sometimes work; it depends on the schema of the prevailing power and justice in the negotiation process, and what kind of peace and hope could be achieved if the outcome of the negotiations do not allow for a complete set of democratic rights for its people. Sharp identifies the pros and cons of engaging in negotiations.

The author describes the various weaknesses of dictatorships; the realities of identifying them and knowing how to attack these weaknesses, and thus getting involved in engaging in a non violent struggle for democracy. He prescribes subtle but effective ways of engaging in political defiance methods. To name a few, the author suggests slowing down the process in the work environments, becoming less effective and inefficient in doing tasks within the bureaucracies, and so forth.

Sharp promotes the need for strategic planning; this has to be a long process that takes time and has to be well thought out, well planned and effectively administered. There has to be constant and thorough communication channels to the people at all levels of the movement. As the people witness and achieve small successes in disintegrating the dictatorship, the movement gains a stronger foothold that would enable the people to continue until the overthrow of the dictator. However, Sharp reminds the reader that even though he promotes nonviolence in achieving democracy, there are always fatalities involved but not as many as have been witnessed in violent struggles for democracy.

The author draws on actual situations that have occurred in the overthrow of dictators; he identifies them as learning tools for future removal of dictatorial rulers.

This was a notable read in these times when we are witnessing change occurring in the Middle East as it relates to overthrow of dictatorships in the region. It has been reported that some of the protestors in Egypt were seen to be holding this particular book in their hands as they engaged in their overthrow of their dictator.