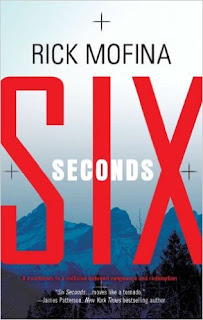 Six Seconds is a novel by Rick Mofina. The story is about the impact of the Iraqi war. An American soldier does a tour of duty in Iraq, gets caught in an ambush and all hell breaks out.

The main plot revolves around three families and a couple from Alberta--the husband being an RCMP officer; the American soldier and his family are from California, the journalist and his family are from the outskirts of Washington, DC and the Iraqi family are in Baghdad. Mofina uncovers this thriller by taking the reader through the lives of these families, who are in some way or another impacted by the war in Iraq. The innocent Iraqi family is subjected to much violence and death which results in the widow taking the ultimate revenge during a papal visit to Butte, Montana.

The plot comes together as the RCMP officer is assigned to investigate the murder of the journalist and his family. The story goes back and forth to include scenarios playing out in California, Montana, Washington, and Alberta.

This novel unfolds in six books with each book being entitled as follows: Where is my son? Blood Revenge, Breaking Point, The Perfect Weapon, Forgive Me For What I've Done, and Death Signal. The two main women characters ask the question What are we doing to each other?

Through this thriller, Mofina depicts the horrors of war, the spoils of war and the horribly tragic consequences of modern day war. He also includes the complexities of investigations of deaths, the stresses and strains of hosting leaders from other countries; in this story, the visiting leader is the Catholic Pope from Rome. It is a dramatic insight of what happens "behind-the-scenes."

This novel is, indeed, a page turner.
Posted by Maria Lynch at 11:47 AM