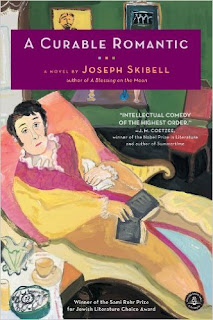 This historical fiction entitled A Curable Romantic by Joseph Skilbell is set in the Jewish intellectual medical enclave in Vienna and Poland, and spans the time period from mid 1900s to WWII. This fictional account is unveiled in three books.

The first book introduces the reader to the main character outlining his humble, yet distorted beginnings from childhood to adolescence when he escapes to Vienna. He becomes Dr. Samuelsohn, an oculist. He attempts to rid himself of his past and participates in the cultural arts scenes of Vienna. While at the theatre he spots Dr. Sigmund Freud with an attractive female. Samuelsohn wants to meet this lady and hence during intermission approaches Freud. And thus the reader is exposed to Samuelsohn's relationship with Freud and his cohorts. The author weaves discussions and explorations of Freud's theories with vivid descriptions of Samuelsohn's desire for intimate female relationships; this one relationship happens to be Freud's patient suffering from hysteria. Here the reader is introduced to the complexities of the paranormal which overwhelms Samuelsohn.

The second book uncovers Samuelsohn's new life with the Esperanto movement. He accidentally meets up with another oculist, Dr. Zamenhof, in Poland, who in his spare time is inventing the international language of Esperanto. Once again Samuelsohn is entangled in a female relationship that bring back all his past phobias of relationship building with a member of the opposite sex. The author successfully mixes the tedium of an international language development with graphic details of Samuelsohn's intimate encounters with a newly found female prospective wife.

The third book finds Samuelsohn much older but not that much wiser as he is caught up in the horrors of the Nazi treatment of the Jews in the Warsaw ghetto. The reader is taken on a journey of death, a near death experience which involves visiting aspects of heaven with a rude awakening to the horrors of life in the Jewish ghettos in Warsaw. The reader gets an ugly taste of how the Jews were treated during this WWII era through the eyes of Samuelsohn.

Ultimately, is the romantic curable? It depends!

Skibell gives a candid and dramatic account of Jewish life. It is an excellent and engrossing read.