Book Review: Monsoon: The Indian Ocean and the Future of America by Robert Kaplan - Non-Fiction 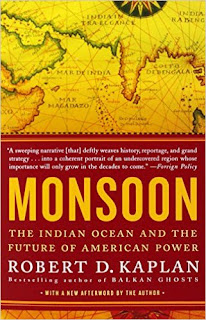 In this non-fictional resource, Monsoon: The Indian Ocean and the Future of American Power, Robert Kaplan, the author, explains the importance of Eurasia and its place in the 21st century. He stresses that the 20th century was dominated by the powers of Europe and America; the focus was on the Atlantic and Pacific Oceans.

Kaplan points out that the shift has occurred towards the littorals surrounding the greater Indian Ocean. Through his experience of traveling in those countries combined with his many, many interviews with prominent scholars and other eminent people in this region, the reader gets a comprehensive understanding of the change that is evident and the future relationships of this region with Europe and particularly America.

The author brings in the appropriate amount of history in context to what is transforming the region in this 21st century. The countries that are addressed in this resource are China, different parts of India, Pakistan, Bangladesh, Afghanistan with some of its surrounding countries that come into play. In his discussion he includes Burma, Indonesia, Sri Lanka and Zanzibar, all part of the littorals of this region.

Kaplan concludes with his viewpoints on some policy initiatives that America ought to engage in to be a vibrant and active participant of this region as the world embarks in the new dynamics of the 21st century.

It is an engrossing account of what could and possibly happen in this new century.
Posted by Maria Lynch at 10:58 AM