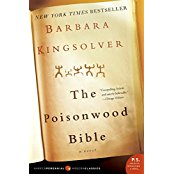 In The Poisonwood Bible, the author, Barbara Kingsolver takes the reader on a journey to the Congo in Africa. It is set in the early 1960s just as the country was soon to become independent from Belgium.

The story evolves around a young American family; the father is the missionary while the mother and four daughters accompany their father. They leave their comfortable home in Georgia to arrive in Leopoldville, in Congo; they are immediately taken to the most remote part of the country.

Kingsolver narrates the story from the different perspectives of the women in this household. The daughters range from pre-school to early teens; their individual perspectives become even more revealing as they grow older in this remote part of the Congo.

Kingsolver meticulously engages the reader into rural living in the Congo. This family endures some of the most dramatic and horrifying experiences that were so alien to their lifestyle in Georgia; all in an attempt, on their father's part, to convert the Africans to christianity. He would not take no for an answer. The father turns out to be the tragic figure in this novel.

Kingsolver, very cleverly, unveils the social justice issues and brings to the forefront the discussion on the role of religion as it relates to this part of the Congo. It is a page turner.
Posted by Maria Lynch at 8:13 PM