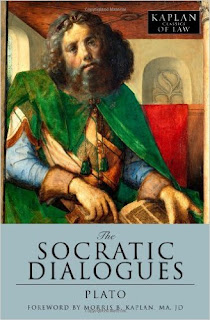 The Socratic Dialogues as captured by Plato, translated by Benjamin Jowett and published by Kaplan Classics of Law. New York. In the foreword of this resource, Professor Kaplan describes brief overviews of five specific dialogues. He reminds us of the use of the Socratic method that the law students are encouraged to master in their practice of law. He observes that Socrates was not a lawyer or a judge instead he was a “philosopher” of his era. The five dialogues were documented by Plato, a student of Socrates. The dialogues are entitled with the names of the persons that Socrates engages in dialogue.

The dialogue with Euthyphro is focused on discourse that relates to “piety” and “impiety”. Their exchanges concentrate on the meanings, examples of practices and the rationale for being pious and impious. They further engage into the merits and demerits of these practices and their impact on exploring the meaning of truth.

In Apology, Socrates deliberates on how he got into trouble with the law. He is accused of “corrupting the youth.” He reflects on the theme of “let the speaker speak truly and the judge decide justly.” He encourages the youth to question and follow the line of interrogation towards authority. He attempts to delineate wisdom from established opinion.

In the prison where Socrates is held, Crito engages Socrates in dialogue about escaping from the prison and ultimately the charges laid against Socrates. Crito claims that these charges are futile and have no merit in any court of law. Instead, Socrates defends his right to stand in front of the judges and claims that he is guided by reason and the principles by which he adheres to.

The dialogue with Lysis is an uplifting discussion on love and friendship. They examine vanity and the process of conquest. The discourse leads to defining friendship and what it entails to be a friend. The probes are enhanced with examples that Socrates uses to illustrate his viewpoints.

Socrates engages Laches on the themes of courage and bravery; Socrates encourages independent thinking by posing questions that will focus on deliberate thoughts. He alludes that “a good decision is based on knowledge and not on numbers.” He probes further on the acquisition of knowledge and how this knowledge is imparted that makes it relevant to being courageous and brave.

The dialogue with Charmides is based on “Know Thyself” and “Be Temperate.” The probing evolves around these themes relating to the science of health and “the knowledge with which he discerns good and evil.” Ultimately it becomes a discussion on having the gift of wisdom and temperance.

This resource highlights the artful way of having a discourse, a discussion or a debate on topics of interest. Socrates was obviously a master at probing individuals into thinking independently and deeply about any philosophical topic. He used the unique technique of engaging in discussion by developing examples that anyone could understand; they were real life examples, examples about animals or nature or ways of thinking of everyday issues and problems. Socrates, magnetically draws his debaters into profound exploration of what they are talking about.
Posted by Maria Lynch at 12:06 AM