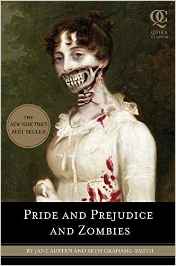 Author, Seth Grahame-Smith adapted Jane Austen’s Pride and Prejudice into a different novel entitled Pride and Prejudice and Zombies. Grahame-Smith uses Austen’s novel as a basis for incorporating vampire-like creatures into this story. One of the main characters, Elizabeth Bennett, becomes an expert in attacking and annihilating the zombies who died of the plague and are now arisen to attack the living.

As the story evolves, the fine art of killing and maiming citizens are described in gruesome detail. These citizens are continually confronted by the zombies who suddenly appear in the day-to-day living of the citizens of the town. Some of these citizens also get ill with the plague and meet their demise.

Grahame-Smith turns a soothing, comedic novel about a regular family into a macabre novel. He elevates some of the women into prized fighters who surpass the skills of the men around the town. There is some sort of gender equality in the essence of this novel with strands of female superiority throughout the novel.

This author has a good style of writing; he brings out the raw reactions to the different scenarios that are evident in the story. As a reader you will react with horror and disgust as you absorb what is happening in these scenarios of the story.
Posted by Maria Lynch at 1:26 PM